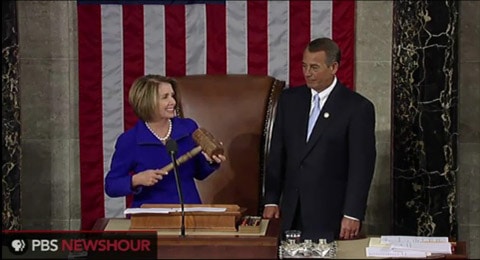 Ms. Pelosi assuredly had no chance of being re-elected speaker, as Democrats are now in the minority. But lawmakers are required to conduct a roll call vote for speaker at the beginning of a new Congress. Rep. John Boehner (R., Ohio) won handily with 241 votes. Ms. Pelosi, a California Democrat, received 173 votes.

House Democrats decided after the election that Ms. Pelosi would head the caucus as minority leader, a controversial move, considering that Democrats lost 63 seats in the mid-term elections – and their House majority.

The defections in Wednesday’s vote for speaker were a protest by Democrats who wanted new leadership.

Watch the passing of the gavel and remarks by Pelosi and Boehner, AFTER THE JUMP…