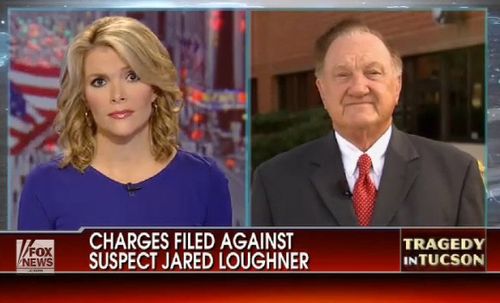 Pima County Sheriff Clarence Dupnik continues to speak out against the political vitriol and dangerous rhetoric.

"I think that it's irresponsible for s not at some point to address this kind of behavior and try to put a stop to it….When allegedly credible people who get up in front of cameras and microphones and say that they're not true, and try to enflame the public. When miilions of dollars are filtered into this country to buy very vitriolic ads and they don't have to be identified – the countries that they're coming from or they people that are donating them. I think it's time that we take a look at it. Free speech is free speech but it's not without consequences.

Watch interviews with FOX News' Megyn Kelly and Geraldo Rivera, AFTER THE JUMP…