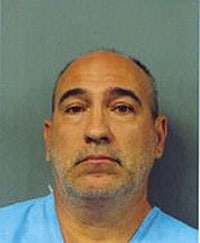 Storms told deputies that he was merely having lunch at Lafreniere Park, 3000 Downs Blvd., in his van when he decided to relieve himself using a bottle instead of using the restroom, an incident report said.

The two women flagged down a park employee who notified the Sheriff’s Office. The employee also detained Storms until deputies arrived.

Bond for Storms was orginially set at $5000 but he was released early because of overcrowding at the jail.

“Armed with bullhorns, Bibles and picket signs, Storms and a group of followers in 2003 protested against Southern Decadence, the gay three-day festival held over Labor Day weekend in the French Quarter. Storms’ efforts prompted the New Orleans City Council to ban megaphones and other amplification devices.”

Here’s the article from 2003 about Storms’ campaigns to end Southern Decadence, which included a Christian parade and ‘purity’ rally decrying the depravity:

Last year, Storms videotaped public sex acts on Bourbon Street and made the tape available to state legislators, hoping to bring an end to the celebration.

In 2005 Storms sued gay rights group Action Wisconsin, claiming the group defamed him by saying that he advocated the murder of gays. He lost the lawsuit, a decision that was upheld by the Wisconsin Supreme Court. Storms was then ordered to repay the group $87,000 in court costs.

In 2003, Wisconsin Christians United invited him to speak at the International Conference on Homo-Fascism in Milwaukee.

Action Wisconsin obtained an audio recording of his speech and publicized remarks it said incited violence against gays. The group issued a press release saying Storms made sounds like gunfire, as if he were shooting gay people, and said, “God has delivered them into our hands. Boom boom boom … there’s twenty! Ca-ching! Glory, glory to god.”

The press release also admonished a state senator for attending “a speech apparently advocating the murder of his own constituents.”

[Storms’ attorney] Donohoo claimed statements in the press release were false and defamatory.