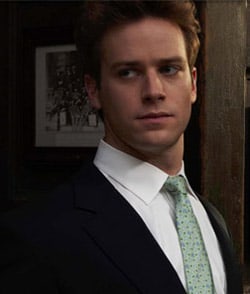 E!'s Ted Casablance and Taryn Rider caught up with Hammer on the red carpet at the SAG Awards.

Said Hammer of the script:

"It's not a kissing scene—it's a ton of kissing scenes…I'm so excited to work with Clint, and from what I hear, he's not the type of director who has a ton of rehearsals and takes. I think we're just sort of thrown in there and have to make it happen….I actually just met [Leo] for the first time Saturday at the DGA Awards. Sure, we talked business…He's a talented actor. I'm not nervous or afraid of it being awkward. The script is great. The scenes are in there for a reason. I'm really excited….Yeah, you hear that, Leo? Pucker up!"