Before the holidays, I posted about Virginia Del. Bob Marshall (R-Prince William, pictured) and his attempt to ban gays from serving in the Virginia National Guard.

A House committee has killed the measure: 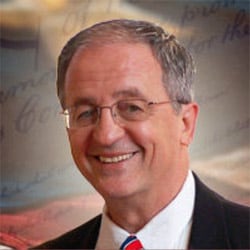 Del. Bill Janis, R-Henrico, said different standards for members of the state's Guard versus other service members could present a "management and leadership nightmare" if they were to serve together.

And he questioned the effects of such a change on federal funding.

Marshall said he didn't agree with the management concerns and argued that the state already has some different standards for the National Guard than the U.S. armed forces without triggering funding disruptions.

Morrissey left the meeting steamed after House Speaker Bill Howell (R-Stafford), who chairs the committee, allowed the group to vote before he'd presented the bill.