On February 13, Steve posted the story of two men, Joe Sonka of the blog Barefoot & Progressive, and Brandon Absher, who were refused entrance to the Creation Museum in Petersburg, Kentucky for a Valentine date night because museum workers perceived they were a gay couple. 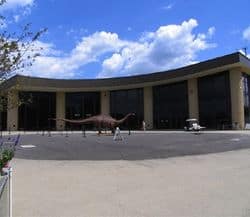 Now, the museum is responding to those claims.

The museum says the pair was not allowed in, because of a blog post, that led them to believe the pair was coming with an intent to disrupt a romantic evening out.

"They were here to disrupt, they may say something else, but all you have to read is that January 13th blog," said Mark Looy, who is a spokesperson for The Creation Museum.

Looy said two men, who posed as a gay couple and tried to crash a Valentine's date night, would never have been allowed in under those circumstances. "Since then, both of them admitted they are straight," Looy said. "It was a stunt, this is a manufactured story, to draw attention to themselves."

They explained to us that the Creation Museum Date Night was a "Christian environment", therefore the presence of two men eating dinner together would not be allowed. The very sight of this would 'add an un-Christian element to the event" and "disrupt the evening for everyone.' The Creation Museum rep further informed us that you cannot be a Christian if you are gay, asking "can you tell me what exactly is Christian about being gay?"

Looy said that gay groups are the ones who should be angry: "That these two men who were straight, came to the museum posing as a gay couple, in essence, playing to the stereotype of gays. I'm surprised there hasn't been any outrage from the gay leaders in the area."

Chris Hartman, director of the LGBT rights group Fairness Campaign, said the museum did not behave ilegally: "There are no federal or state laws prohibiting discrimination, on the basis of someone's perceived sexual orientation or gender identity. So, if someone believes you to be lesbian, gay, bisexual, or transgender, they have every legal right to deny you a public accommodation, like a museum visit or restaurant visit or bus ride."