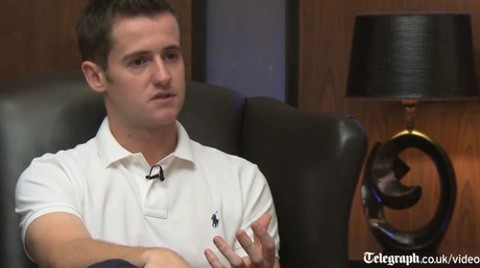 English cricketer Steven Davies has come out of the closet, becoming the first professional athlete in that sport to do so, in an interview with The Telegraph:

In a frank and moving interview with Monday’s Daily Telegraph, Davies, who started his professional cricketing career with Worcestershire when he was 18, said he could no longer bear to lie about his sexuality. Davies, who told his family he was gay five years ago and has enjoyed their complete support, said it was a huge relief to finally come clean and be honest with the wider public.

And he said he hoped his decision would help other young gay people to have the confidence to follow in his footsteps. He explained: “This is the right time for me…I feel it is right to be out in the open about my sexuality. If more people do it, the more acceptable it will become. That must be a good thing.”

Davies said he has received much support from his teammates, and cited Welsh rugby icon Gareth Thomas as inspiration for his coming out.

Thomas, who came out last year, expressed support for Davies:

"I am really happy for Steve and pleased that he has had the strength and courage to be able to come out and be open and honest about who he is, and to see that he has the support of his family and teammates in doing it, like I did. When you are a professional sportsman you have to be 100 per cent in the moment, and I know that I played many years of 90 per cent in the moment and 10 per cent listening to the crowd. That’s why it’s good for young sports people to come out early and be the best they possibly can through their career. There comes a point where you think that the whole world is against you, and then you say to yourself “I can carry on in this dark little world or I can be honest with everybody and live the life I want.”

Watch Davies discuss his decision, AFTER THE JUMP…