Elton John will host Saturday Night Live on April 2 and serve, with Leon Russell, as the show's musical guest, according to The Hollywood Reporter: 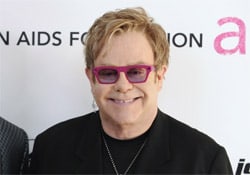 The booking was revealed at John's annual Oscar viewing party, held Sunday night at the Pacific Design Center. The swank bash included a live auction to benefit the Elton John Aids Foundation. Among the items offered was VIP access for two to SNL's April 2 show and cast after-party, courtesy of Lorne Michaels. The winning bid came in at $75,000.

Academy Awards aside, John reminded the crowd of 1,000 that he and partner David Furnish were also celebrating a movie feat that night: Gnomeo & Juliet nabbing the top spot at the weekend box office in its third week out. Said John, who wrote the music for the film, which Furnish produced: "I never thought I'd be coming to our Oscar party having a No. 1 movie, but it's fantastic."

Previous Post: « Watch: Dior Designer John Galliano Proclaims ‘I Love Hitler’, Tells Woman ‘People Like You Would be Gassed’
Next Post: James Franco Skips His Own Oscar After-Party, Jets Out of Town »