GOP Iowa Rep. Steve King, who has led the fight against marriage equality in his home state, wants to punish Obama for deciding that DOMA could not longer be defended in court by cutting funds to the Department of Justice, ABC News reports. 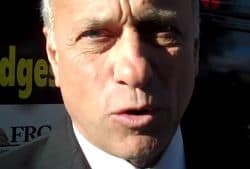 Said King: “We have the authority to do a few things, and one of them is to control the budget. The resources that they would be using to defend the DOMA law in court are not necessary to appropriate to them. So with open rules on appropriations, that’s an opportunity to bring an amendment that will reduce their budget by an appropriate amount. To continue funding a Justice Department that defies their oath to the Constitution and refuses to enforce the laws of the U.S. is a terrible precedent to tolerate. So the first thing is to send a very strong message by cutting the funding to the Justice Department."”