Those of you who have seen Black Swan will remember Epperson's scene. He writes about his audition for, and his real-world connection to the "Jaded Piano Player" he plays in Black Swan, for The Daily Beast: 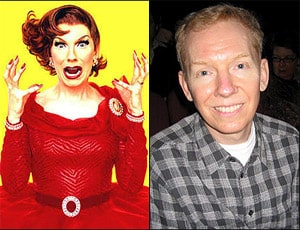 We all have our own Black Swan, that creature inside each of us who is waiting to spring its blazing essence on the unsuspecting world. Mine is, indeed, The Fabulous Lypsinka. My White Swan self was—and to some degree still is—a shy, frightened, sensitive sissy boy from the small town of Hazlehurst, Mississippi. I was not so shy or frightened, however, that I couldn’t work up the courage to apply for a job as rehearsal pianist at American Ballet Theatre soon after I arrived in New York City in 1978. Two years later, I was a member of the company and in the studio with Gelsey Kirkland, Mikhail Baryshnikov, Anthony Dowell, Natalia Makarova, Alicia Alonso, Rudolph Nureyev, Carla Fracci, Margot Fonteyn, Cynthia Gregory, and Sir Kenneth McMillan. In her 1986 memoir, Dancing on My Grave, Gelsey did not refer to me as the Jaded Piano Player, only “the pianist” who witnessed the heart-wrenching real-life scenes in which she struggled with Baryshnikov, and—perhaps most of all—her own inner Black Swan.

And now my somewhat worldlier White Swan self can be seen in Aronofsky’s artful horror film, finally walking out on poor, frustrated Nina at her most Nina-esque. Yet my character is one of the few people in the movie who seems to take pity on Portman’s character, urging her not to work too hard. Finally, though, he becomes fed up with her in that same scene and delivers the line, “I have a life,” that audiences find amusing, giving them a brief moment of nervous laughter.

Epperson says Darren Aronofsky had no idea who Lypsinka was, until he presented him with a New York magazine article: You’re hot!” exclaimed Aronofsky as he leered at the photo.