NY GOP Rep. Chris Lee, who was exposed by Gawker earlier today for sending out shirtless photos of himself to a woman on Craigslist, has resigned in a statement read on the House floor.

Said Lee in the statement:

“It has been a tremendous honor to serve the people of Western New York. I regret the harm that my actions have caused my family, my staff and my constituents. I deeply and sincerely apologize to them all. I have made profound mistakes and I promise to work as hard as I can to seek their forgiveness…The challenges we face in Western New York and across the country are too serious for me to allow this distraction to continue, and so I am announcing that I have resigned my seat in Congress effective immediately.” 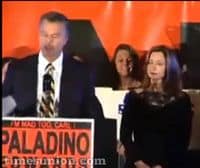 "Earlier Wednesday Lee, asked by Fox News about the report as he was walking to his car, said he was not willing to talk about the issue, adding 'I have to work this out with my wife.'"

Video of Lee on election night, thanking his wife and referencing his 5-year-old son, AFTER THE JUMP…

As i mentioned earlier, Lee did not have a recorded vote on marriage equality but did vote "no" on the repeal of 'Don't Ask, Don't Tell'.