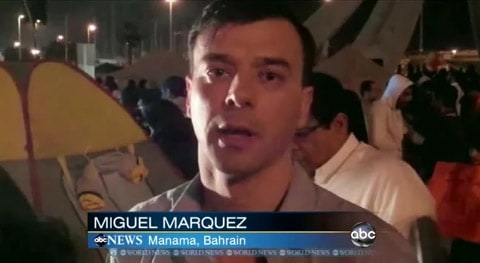 While the attack on Marquez seems clearly related to the protests, it does add to the larger debate of putting journalists in danger zones. In Marquez' case, another question comes up: how safe are openly gay journalists like Marquez in countries where they routinely imprison, deport, and often kill people for being gay?

Just last week, 127 gay men were reportedly arrested at a party in Bahrain. It's a routine occurrence, and clearly the climate there for gays is not a safe one.

Listen to the harrowing audio of the beating, AFTER THE JUMP…

Previous Post: « Ugandan Lesbian, Granted Asylum in UK, Speaks of Hope for Others After David Kato’s Death
Next Post: CPAC Chair Al Cardenas: GOProud Can Come to CPAC, But They Must Drop Support for All Gay Rights Measures »