Prossy Kakooka, a Ugandan lesbian who was granted asylum in the UK, speaks about her experience: 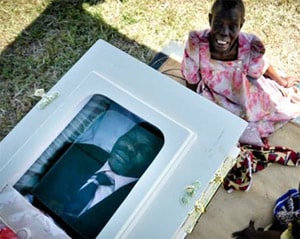 A lot happened to me in Uganda before I came to seek refuge here. I was imprisoned for being gay. I was also gang-raped, badly burned and beaten in a police station.

I managed to escape with the help of a family member. Naively, when I reached England I sighed in relief, thinking it was the end of my suffering and that I was going to be protected straight away – it never occurred to me that I was about to embark on the longest and toughest fight of my life. The asylum system is ruthless and can be very brutal.

When I arrived here I was in a bad way. Aside from the internal pain I sustained from the rape, the burns were at that stage where they become boils filled with fluids – when they burst it is the most excruciating pain. They were all over my legs and thighs. I went to an NHS walk-in centre and they were so shocked they refused to touch me. They called the police who, after hearing how I got my injuries, took me to a rape referral centre. I was not prepared for what happened next. After you have been badly violated, the last thing you want is prying hands, bright lights and people checking you over, even if I now know it had to be done.

I got a doctor's letter confirming that I had been raped, and that my injuries corresponded with what I was saying. The police took forensic photos as well. Despite all this, I was refused asylum: I was told that the Home Office agreed that I was gay and could not deny I was attacked because of the medical report, but that I had to go back and relocate to another part of Uganda. I had to go to court a number of times and was asked to give details of my rape – despite having medical reports available. It was like experiencing the attack over and over again. It was only after conducting a public campaign, with the help of some very kindhearted British people and others around the world who signed my online petition, that I managed to get asylum.

Prossy says that if anything good can come of LGBT activist David Kato's death, it is that more like her can escape the hideous persecution they are put through in Uganda.