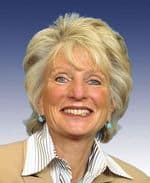 U.S. Rep. Jane Harman (D-Venice), a leading congressional voice on anti-terrorism issues, plans to resign from Congress to head up the Woodrow Wilson International Center for Scholars, a senior congressional source confirmed Monday, setting up a special election to choose her successor in a coastal district that stretches from Venice into the South Bay…Harman said she would remain in Congress for 'some weeks and do everything possible to ensure an orderly transition to whomever is elected to succeed me.'"

According to Harman's website, "As the most junior member of the House Armed Services Committee in 1993, Jane told Colin Powell, then Chairman of the Joint Chiefs of Staff, that 'Don’t Ask, Don’t Tell' is unconstitutional. She is an original cosponsor of legislation to repeal the flawed policy. She was one of only 67 votes against the Defense of Marriage Act in 1996, a co-Chair of the 'No on 8' campaign in 2008, and has urged that Congress file an amicus curiae petition in the Supreme Court to overturn the ban on gay marriage."