Shia LaBeouf allegedly punched a man at Mad Bull's Tavern in LA after being called an anti-gay slur. Mark Mastro, the man attacked by LaBeouf, says he had wanted a picture of the movie star but he refused. Mastro explained to Radar Online what ahppened after that. 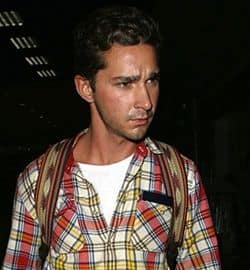 "'He turned around, cursed me out, and I started laughing.' Mastro explains that the actor then jumped in his black truck which was parked directly in front of Mad Bull's."

"'All of a sudden, he jumped out, and ran back towards the bar.  He charged at me! I jumped over the patio fence onto the sidewalk to get away from him. But he kept coming after me. 'He was getting in my face.  He was talking sh*t. He was chest-bumping me.'"

"That's when the bouncer jumped in, Mastro says. 'A bouncer put Shia in a head lock.'"

Police were on the scene within minutes and LaBeouf was handcuffed but were released shortly afterward.