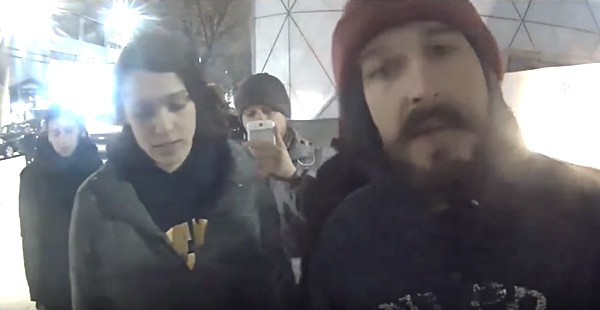 Actor Shia LaBeouf was arrested at his anti-Trump art installation He Will Not Divide Us at the Museum of the Moving Image in Queens, which is scheduled to run for four years or as long as Trump remains in office.

According to a spokesperson at the New York Police Department, the actor then grabbed the scarf of the young man “causing a scratch to the man’s face” and then pushed him, which caused him to fall to the ground.

LaBeouf was arrested around 12.30amEST.

The exact circumstances remain hazy. On a fan Twitter feed for #HeWillNotDivideUs, the name of LaBeouf’s art installation protest, where the arrest took place, a 13 second video shows the actor briefly shoving a man who addresses the camera with the words “Hitler did nothing wrong”.

“Hey,” says the man. “Why did he attack me?” Later tweets from the same account expand the report by saying: “Shia was attacked by a Nazi. Shia got arrested. Nazi got away.” This echoes a later video of fellow protesters who say: “Shia took a hit for us. There were all these Nazis here, he came out and tried to protect us.”

A tweet from the art exhibit claims LaBeouf was arrested for shoving a man who said “Hitler did nothing wrong.”

Previous Post: « Vicente Fox: ‘Trump Doesn’t Seem to be an American. He’s a False Prophet Taking that Nation into a Desert’ – WATCH
Next Post: LGBTQ ‘National Pride March’ on Washington Planned for June 11 »