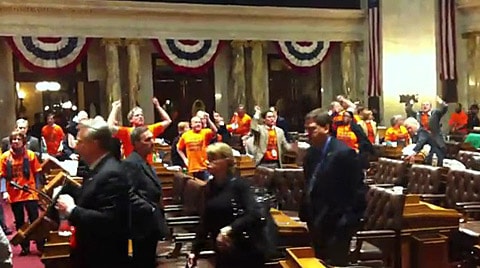 The State Assembly approved a bill early Friday to limit the collective bargaining rights for most public workers, but the measure stalled because Senate Democrats remained out of the state as part of an effort to derail the legislation.

After the vote, Democratic Assembly members shouted at their Republican counterparts, who were escorted from the chamber by the police.

The State Senate cannot vote on the legislation without a quorum of 20 members. There are only 19 Republicans in the Senate, and their Democratic counterparts remained in Illinois to prevent a vote. Wisconsin troopers do not have jurisdiction to order them back home.

Assembly Democrats yelled "shame" as the GOP members walked out.

Watch the disgusting parade, AFTER THE JUMP…