The Wichita School District is defending the publication of a student editorial in the Wichita East High School paper that said same-sex relationships are not normal and cited verses from Leviticus that the author claimed suggested gays would be put to death.

An online petition calling on the school to retract the editorial has more than 1200 signers. 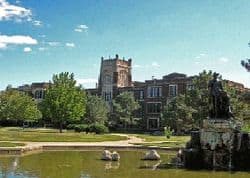 LGBT groups that were planning a press conference in response to the editorial canceled it yesterday following the school's statement about the issue, which read, in part:

"East High Principal Ken Thiessen met with members of his school’s student organization representing students with alternative lifestyles, explained the circumstances leading to publication of this student opinion, and invited students with a different viewpoint to respond with their own opinion piece."

Read the school's statement, AFTER THE JUMP…

This article, like the hundreds of opinion pieces published throughout the school year in student newspapers throughout the Wichita Public Schools, is the opinion of one individual. As with opinions expressed in community media outlets such as the Wichita Eagle and local television stations, the views of one person do not necessarily represent the school or district opinion or position on an issue. Mr. Johnson’s piece is the expression of his opinion, a right afforded to him and all students through the First Amendment and the Kansas Student Publications Act, which specifically notes that “material shall not be suppressed solely because it involves political or controversial subject matter.”

East High administration, teachers and student editors recognized that the opinion of this one student author would prompt potentially uncomfortable reactions and passionate responses from individuals with a variety of perspectives. To this end, East High Principal Ken Thiessen met with members of his school’s student organization representing students with alternative lifestyles, explained the circumstances leading to publication of this student opinion, and invited students with a different viewpoint to respond with their own opinion piece. Messenger student editors prepared and published their own response to Mr. Johnson’s editorial, consulted with the Student Press Law Center in Washington, DC, and have continued the long-standing Messenger tradition of inviting students with different opinions to participate in the conversation.

The opinion of one student writer does not change the Wichita Public Schools’ commitment to providing a safe and nurturing environment for all students. Our high school student newspapers fulfill an important role as we work to prepare students to become critical thinkers and contributing citizens of our community upon graduation. Our district will continue to encourage respectful dialogue and open conversation about a variety of issues, while at the same time ensuring the rights of all students.