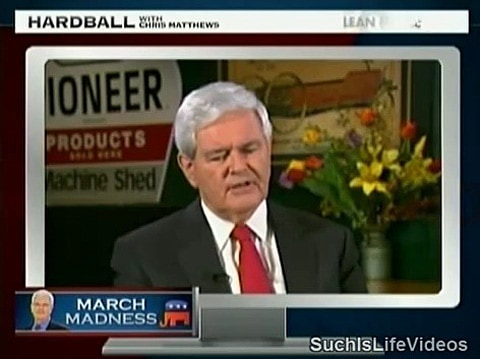 Chris Matthews and guests lambasted Newt Gingrich last night for statements regarding his adulterous past.

“There’s no question at times of my life, partially driven by how passionately I felt about this country, that I worked far too hard and things happened in my life that were not appropriate,” Gingrich told CBN’s David Brody, in an interview taped at the Iowa Faith and Freedom Coalition…

“And what I can tell you is that when I did things that were wrong, I wasn’t trapped in situation ethics, I was doing things that were wrong, and yet, I was doing them,” Gingrich said. “I found that I felt compelled to seek God’s forgiveness. Not God’s understanding, but God’s forgiveness. I do believe in a forgiving God. And I think most people, deep down in their hearts hope there’s a forgiving God. Somebody once said that when we’re young, we seek justice, but as we get older, we seek mercy. There’s something to that, I think.”

Watch the Hardball clip, AFTER THE JUMP…