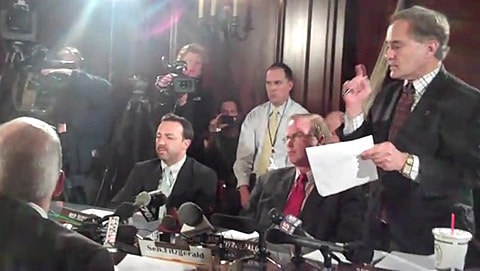 Last night, Wisconsin GOP senators stripped Wisconsinites of collective bargaining rights after pushing through a bill which had been stripped of key fiscal components in order to get around the absence of Wisconsin Democrats.

Only shortly before the vote took place, local news outlets reported that Republicans were splitting Walker's budget repair bill into two. While the Senate requires a quorum of 3/5 of its members to vote on fiscal statutes, just a majority is needed for other matters. Therefore, Senate Republicans broke off the most controversial portions — including a proposal to strip away the collective bargaining rights of public employees — into a separate piece of legislation that could be passed without Senate Democrats, who were still out of state.

Labor officials quickly lambasted Republicans, calling what they did the "nuclear option." Last month, Senate Majority Leader Scott Fitzgerald (R) had said he would not pass any portions of the budget repair bill without Democrats' participation.

Said Matt Miller, leader of the Senate Democrats: "In thirty minutes, 18 State Senators undid fifty years of civil rights in Wisconsin. Their disrespect for the people of Wisconsin and their rights is an outrage that will never be forgotten. Tonight, 18 Senate Republicans conspired to take government away from the people. Tomorrow we will join the people of Wisconsin in taking back their government."

Watch the clips, which are as fascinating as any we've seen so far, AFTER THE JUMP…

Rachel Maddow's report on the news:

Previous Post: « Watch: Newt Gingrich Says He Cheated on His Wife Because of His Passionate Love for His Country
Next Post: Michelle Rodriguez: ‘I’m Not a Lesbian…Michi Likes Sausage’ »