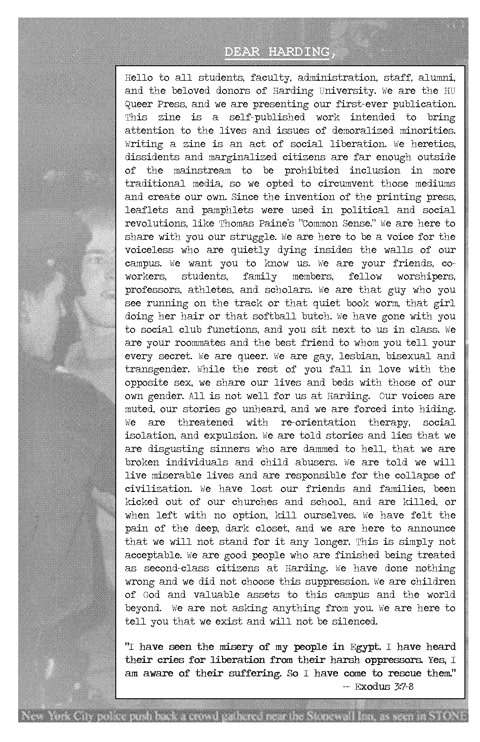 This is the first page of "The State of the Gay at Harding University", a web zine published by LGBT students at Christian conservative Harding University in Searcy, Arkansas. Students have written anonymously about the oppression they encounter at the university, where "conversion therapy" is demanded over the threat of expulsion.

Our tipster writes that within a few minutes of its publishing, the university has reportedly blocked access to it from its computers.

Some quotes from it:

"All is not well for us at Harding. Our voices are muted, our stories go unheard, and we are forced into hiding. We are threatened with re-orientation therapy, social isolation, and expulsion. We are told stories and lies that we are disgusting sinners who are damned to hell."

‎"Three days a week in Harding's Counseling Center, I moved from therapist to therapist trying to find a way out. It was my final act of desperation. The choices were as follow: be saved from my closeted sin or death. I had it all planned out. If this failed, I would die. I had already gotten the gun. It was under my dorm room bed."

‎"My dreams of love ended as counselors told me I would be alone for the rest of my life."

The Arkansas Times has sought comment from school officials but to this point has not received any.

Harding University is a private Christian university whose mission and policies are rooted in biblical principles. All students are given a copy of the handbook and know about our mission and policies before their first day on campus. The student handbook states that the university holds to the biblical principle that sexual relationships are unacceptable to God outside the context of marriage and that sexual immorality in any form will result in suspension from the university.

Based on that policy, university administrators felt that having this website available on campus goes against said mission and policies. In addition, the handbook states that any literature distributed on campus must be approved by the Office of Student Life and must state the name of the sponsoring organization. These pamphlets were both printed and distributed anonymously with no prior approval, and the website is an online version of that pamphlet.