It was about time for Rush Limbaugh to chime in with something offensive about the Japanese earthquake and tsunami, and he didn't let anyone down: 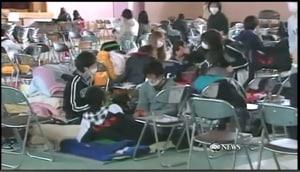 A caller asked Limbaugh, "If these are the people that invented the Prius, have mastered public transportation, recycling, why did Mother Earth, Gaia if you will, hit them with this disaster?"

Limbaugh called this an "interesting question," and played a clip of ABC's Diane Sawyer reporting from a shelter in Japan. In the clip, Sawyer is surprised that the refugees in the shelter have maintained a recycling program. Limbaugh first mocked Sawyer, doing an impression of her and saying that "she sounds like she saw her husband for the first time in six months." He then turned to his caller's question.

"He's right," Limbaugh said. "They've given us the Prius. Even now, refugees are recycling their garbage." Here, he began to laugh, continuing, "and yet, Gaia levels them! Just wipes them out!"

Watch clips, AFTER THE JUMP…