Dalam Botol, Malaysia's first gay-themed film, about how one partner's sex change affects a gay relationship (both characters end up unhappy), has turned out to be a major hit, the Guardian reports: 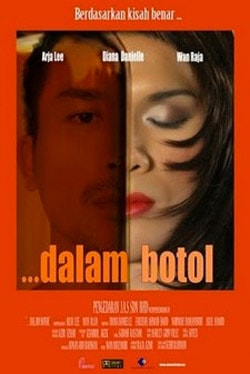 Opening less than a week ago, Dalam Botol (In a Bottle), about a post-op transsexual who comes to realise that she may have been better off as a man, has already earned more than one million ringgit (£206,000) at Malaysian cinemas, easily recouping its production and marketing costs of 970,000 ringgit. Prior to filming, writer and producer Raja Azmi Raja Sulaiman had to submit details to the country's strict censorship board, which nevertheless gave its approval following a couple of amendments.

Malaysian films are not allowed to show support for gay lifestyles: the country still maintains a law against sodomy, which is punishable by up to 20 years in prison, though prosecutions are rare. Dalam Botol offers a non-explicit vision of gay romance, featuring heterosexual actors who hug but do not kiss. However Sulaiman told the Associated Press she believed the box office results "prove that Malaysian audiences can handle such movies, that they're more open and not so conservative any more." She added: "I hope it'll inspire more films that are meaningful and linked to the reality of people's lives."

Many in Malaysia's LGBT community do not approve of the film because it depicts the characters as unhappy. Said rights activist Pang Khee Teik, co-founder of the Malaysian sexual rights awareness group Sexuality Independence: "Many of us Malaysian gays, lesbians and transgenders have absolutely no regrets being who we are,"