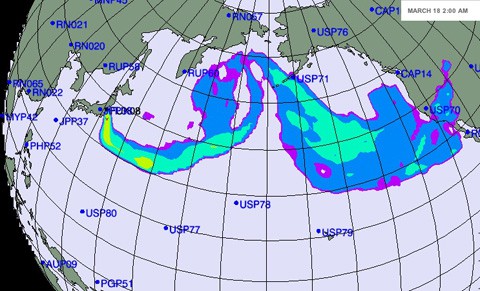 Experts say the amounts will be minor and well within limits that are safe, but small amounts of radiation from the Fukushima Nuclear Power plant currently in crisis in Japan will reach California by tomorrow.

A network of sensors in the U.S. and around the world is watching for the first signs of that fallout, though experts said they were confident that the amount of radiation would be well within safe limits.

Atmospheric experts said the material should begin showing up on the West Coast as early as Friday, though it could take up to an additional week for the 5,000-mile trip from Japan to Southern California. Although the organization has told its member countries that the first indication of radiation would hit on Friday, the plume from a North Korean nuclear test in 2006 took about two weeks to travel to North America, U.N. officials said.

Forecast levels of radiation on March 18, at 2 am (unclear what time zone) are shown in the screencap above.

The projection, by the Comprehensive Test Ban Treaty Organization, an arm of the United Nations in Vienna, gives no information about actual radiation levels but only shows how a radioactive plume would probably move and disperse.

The forecast, calculated Tuesday, is based on patterns of Pacific winds at that time and the predicted path is likely to change as weather patterns shift.

Experts assure there is no need to worry in the U.S.

The chairman of the Nuclear Regulatory Commission, Gregory B. Jaczko, said Monday that the plume posed no danger to the United States. “You just aren’t going to have any radiological material that, by the time it traveled those large distances, could present any risk to the American public,” he said in a White House briefing.

Meanwhile, the situation in Japan worsens.