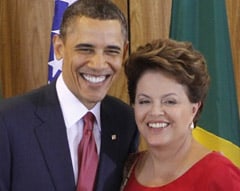 Under a section labeled "Democracy, Human Rights, Racial Equality and Social Inclusion," the leaders recognize the need to promote respect for the human rights of LGBT people, and made note of plans to establish a "special rapporteur" to that end at the Organization of American States (OAS).

Here's the section, from the statement provided to us by the White House:

"They agreed to cooperate in advancing democracy, human rights and freedom for all people bilaterally and through the United Nations and other multilateral fora, including ensuring respect for human rights in the context of the democratic movements and transitions; strengthening the UN Human Rights Council as recently demonstrated in the case of the creation of the Commission of Inquiry on Libya; promoting respect for the human rights of lesbian, gay, bisexual and transgender individuals through the establishment of a Special Rapporteur at the OAS; and improving the conduct of free and fair elections regionally and globally, including through the promotion of human rights in the context of elections and increasing their accessibility to disabled persons."

No additional details were immediately available.