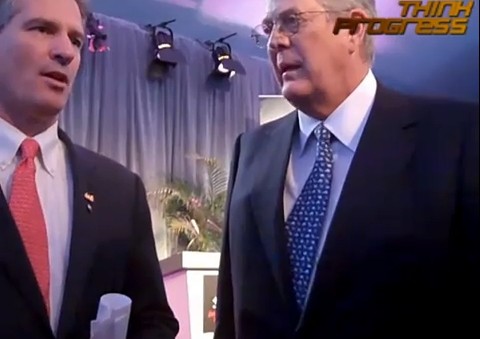 Politicians often cite fundraising as the worst part of their job, and this footage of Sen. Scott Brown (R-MA) asking billionaire conservative financier David Koch for a contribution shows why:

BROWN: Your support during the election, it meant a, it meant a ton. It made a, it made a difference and I can certainly use it again. Obviously, the uh . . .

KOCH: When are you running, uh, for the next term?

BROWN: I’m in the cycle, I’m in the cycle right now. We’re already banging away. But you guys should all be very proud. I mean this is amazing. I’ve actually taken the tour and uh just the things you aim to attack this issue is, is huge.

Awkward! Koch doesn’t even seem recognize the brown-nosing Brown, but if he did, he would realize that the Tea Party has targeted the Senator for his “moderate” votes, like supporting DADT’s repeal, a fact that will probably dissuade Koch, because he and his equally rich brother only give money to the most conservative politicos in the field.

Watch the exchange, AFTER THE JUMP…