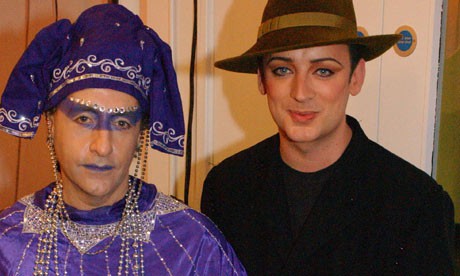 As Andy mentioned a couple of days ago, Boy George's "oldest and closest friend" Philip Sallon suffered a fractured skull in a brutal attack in London last weekend. George has now spoken out about the incident and is claiming that the assault was an anti-gay attack. He is also criticising police for failing to furnish CCTV footage of the attack which occurred in a very popular part of town.

According to the The Guardian, George also believes that attitudes about openness are changing and not always for the better:

But George said he felt that attitudes towards overt individuality had hardened since the 80s. "These things go in circles," he said. "In the early 80s there was this sense that things were changing, and becoming more open-minded. But we don't have that sort of gorgeous youth culture any more, the glam rockers, the New Romantics. People aren't so individual any more. There is this sense of why would you want to stand out and make a show of yourself?"

He added: "You can find that sort of attitude in the gay community too. That if you are an exhibitionist you are somehow spoiling the big assimilation. Most gay men go out of their way to look normal and fit in, but Philip is not of that breed." Despite shifts in public attitudes towards homosexuality, much more progress still had to be made, George said. "Just because you see a few more gay people on TV doesn't mean there is no longer a problem. In the last 10 years we have seen lots of attacks in the West End, people have been killed. [Homosexuals being targeted] is not uncommon."