Gay Men Can Now Give Blood In The UK...As Long As They Haven't Had Sex For 10 Years - Towleroad Gay News

The ban on blood donation by gay men in the UK is being lifted over concerns that it could be in violation of the Equality Act. However, there is one stipulation: 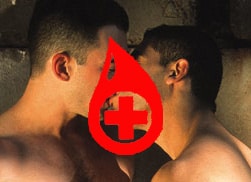 However, gay men will only be permitted to donate if they have not had sexual intercourse for a decade. Homosexuals who are or have recently been sexually active will continue to be barred from giving blood.

Anne Milton, the public health minister, is expected to announce the changes within weeks and she is understood to be backed by Andrew Lansley, the Health Secretary, and Lynne Featherstone, the Equalities Minister.

The changes were instigated by Sabto, the advisory committee on the safety of blood, tissues and organs, which had concluded that if the ban were replaced by a new rule preventing gay men from giving blood for five years after having sex with another man, the risk of HIV reaching the blood supply would go up by less than 5%.

It is estimated that this figure would halve if the “deferral” period were increased to 10 years, so ministers backed this option. The 10-year delay also ensures that people who are not aware they have contracted HIV do not pass it on accidentally.

Pink News adds: "86,500 people in the UK have HIV. 42 per cent are gay men, 54 per cent are heterosexuals, the majority of whom are Africans according to the Terrance Higgins Trust A government source told the newspaper: 'A complete ban is unfair and discriminatory but we need to protect public health, so the 10-year rule is what is being considered.'"