An openly lesbian Chicago-area high school senior who was told she could not wear a tuxedo to her prom has now won the right to do so. Belinda Sanchez's Proviso East High School principal initially informed her that she was required to wear a dress to the event. The Chicago Tribune reports: 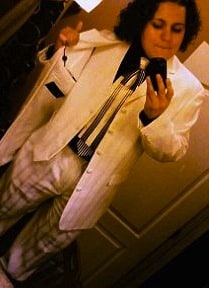 She wound up contacting the American Civil Liberties Union of Illinois over the prom situation. On Wednesday, the group sent a letter to the school district backing her position.

"This sends a negative message to other students that they can't express who they are," said John Knight, director of the Lesbian, Gay, Bisexual, Transgender Project at the ACLU. "It's a First Amendment right, a free speech right, and that includes her right to send a message through wearing male clothing that she doesn't think women should be restricted to traditional female clothing."

On Thursday, the Proviso Township school district sent a response to Knight saying that Sanchez will be allowed to wear a tuxedo to the prom, on April 22.

A school district spokeswoman wrote an email to the Tribune about how the incident involving Sanchez has been a learning experience for the school: "(Sanchez has opened) up a new, very interesting and healthy dialogue in terms of our prom review procedures. We support our students in all of their differences and we encourage them to express themselves in various ways as long as it is not disruptive to the school environment. The principal gave his initial determination based on his interpretation of the policy, and the student asked that it be reconsidered. After looking into the policy — it was."

High school lesbians wearing tuxes in school has foolishly been an issue all over the country. You may remember similar situations last year in Mississippi and Arkansas.