Roberto De Mattei, a well-known Italian historian, made the ridiculous claim on a Roman Catholic news channel. The Scotsman reports: 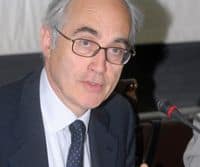 In an interview with RadioMaria, a religious news network, Prof De Mattei, 63, said: "The collapse of the Roman Empire and the arrival of the Barbarians was due to the spread of homosexuality.

"The Roman colony of Carthage was a paradise for homosexuals … the abnormal presence of a few deviants infected many others."

Prof De Mattei based his comments on the writings of fifth-century Christian author Salviano di Marsiglia. He added: "The invasion of the Barbarians (of Rome] was seen as punishment for this moral transgression. It is well known that effeminate men and homo- sexuals have no place in the Kingdom of God. Homosexuality was not rife among the Barbarians, and this shows that God's justice comes throughout history, not at the end of time.''

Sign an e-petition (written in Italian) calling for the resignation of De Mattei, who is head of the country's National Research Council, here.

Watch a video (also in Italian) in which De Mattei says that the recent catastrophic events in Japan were "divine punishment," AFTER THE JUMP.