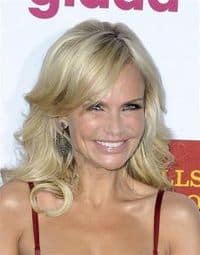 Sean Hayes presented Kristin Chenoweth with the Vanguard Award which she was awarded for her promotion of equal rights for the LGBT community and speaking out in support of Hayes after last year’s controversial Newsweek article written by Ramin Setoodeh.

Outstanding TV Journalism Segment – MSNBC’s The Last Word With Lawrence O’Donnell won for his segment “Fort Worth Speech” about City Council member Joel Burns and his incredibly moving speech. Burns and O’Donnell met in person for the first time on stage tonight.

Outstanding Film in Limited Release – I Love You Phillip Morris

The GLAAD Media Awards will hand out the final awards of the year on May 14 in San Francisco.