Atlanta Braves pitching coach Roger McDowell just received light disciplinary action from his employer. Major League Baseball has suspended him for two weeks without pay and also fined him an undisclosed amount for anti-gay slurs and gestures he made during a game earlier this month. McDowell was put on administrative leave on Friday.

The official release from the league: 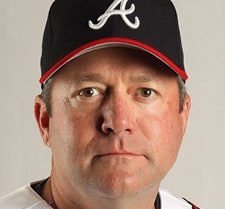 "McDowell, who had requested last week to apologize directly to the fans involved in the incident, will do so now that the investigation has been completed. The fan involved, Justin Quinn, will be invited along with his family to attend a future San Francisco Giants game as guests of Major League Baseball. In addition, MLB will reach out to education programs that aim to promote tolerance and sensitivity."

"Baseball Commissioner Allan H. (Bud) Selig said: 'Major League Baseball is a social institution that brings people together and welcomes all individuals of different races, religions, genders, national origins and sexual orientations into its ballparks. Conduct by people associated with MLB that shows insensitivity to others simply cannot and will not be tolerated. I understand that Mr. McDowell is very contrite about his conduct, and hopefully this incident will be used to increase public awareness of the importance of sensitivity to others. I commend Justin Quinn and his family for bringing this issue to our attention so that it will not happen again in the future.'"

As part of the disciplinary action, McDowell has also been ordered to take sensitivity training.