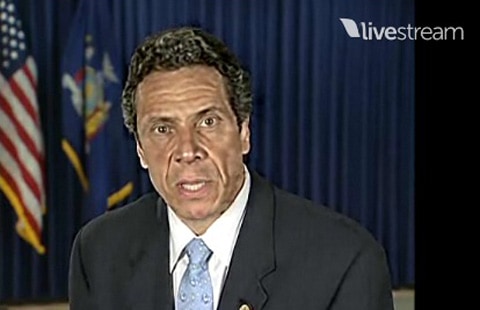 Governor Andrew Cuomo today released a 90-second video message saying “New York has fallen behind” on marriage equality and urging people to call their legislators in support of its passage.

Says Cuomo in the clip: “This is a matter of fairness and equality. It is not a question of religion or culture, but a question of legal rights and government policy….When it comes to fighting for what’s right, New Yorkers wrote the book, and marriage equality is the next chapter of our civil rights story.”

Watch Cuomo’s video, AFTER THE JUMP…

New York’s legislative session ends in less than a month. A marriage bill has yet to be introduced in the Senate, though much lobbying has been done by a coalition of advocacy groups called New Yorkers United for Marriage, as well as NYC Mayor Michael Bloomberg. Cuomo has been traveling throughout the state trying to engage support for passage of a marriage equality bill.

Previous Post: « Watch: Timberlake as Mozart in Skit Cut from Saturday’s SNL
Next Post: Watch: Obama Limo Gets Stuck on Curb at U.S. Embassy in Dublin »