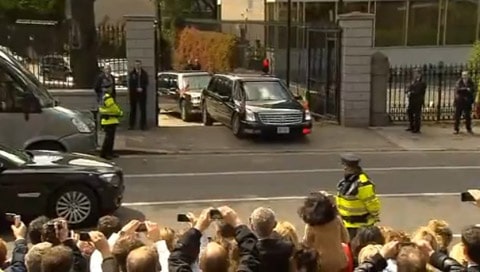 President Obama's car, aka "The Beast", was hobbled by a driveway as it tried to leave the U.S. Embassy in Dublin in front of a large crowd.

RTE said Obama and his wife Michelle stayed in the car while security officials and police officers went running over to the stranded vehicle.

After a while, the Obamas switched to another car to drive to the Marine Force One helicopter waiting to whisk them to the village of Moneygall, where one of Obama's great-great-great-grandfathers came from.

The Beast is designed to withstand all manner of attacks.