Charles Barkley on gay players in the NBA: “First of all, every player has played with gay guys. It bothers me when I hear these reporters and jocks get on TV and say: ‘Oh, no guy can come out in a team sport. These guys would go crazy.’ First of all, quit telling me what I think. I’d rather have a gay guy who can play than a straight guy who can’t play.” 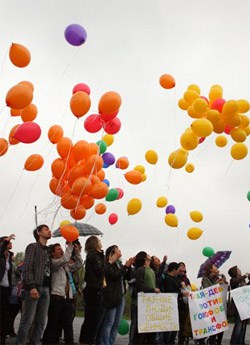 Would you get your man parts pejazzled?

Obama authorizes sale of "Made in the USA" birth certificate T-shirts.

The Washington Blade speaks to Nick Espinosa, the activist who gave Newt Gingrich the glitter makeover.

Tim Kaine: Gay couples should be allowed to adopt. Virginia advocacy groups ask for more time: "A coalition of groups, including gay-rights advocates, wants the Virginia Board of Social Services to allow more public comment on whether the state should bar private adoption agencies from discriminating against prospective parents based on sexual orientation. " 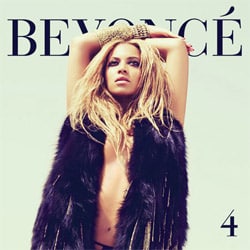 Rhode Island House Speaker Gordon Fox under fire for compromise on marriage equality vote. "These folks were looking for a champion," Fox, a Providence Democrat. It hurts me to think that I'm not quite their champion at this point. That bothers me. Because so many people were waiting for so long … but you have to be able to move votes."

David Boies and Ted Olson discuss status of Prop 8 challenge: "There is, legal experts say, a distinct possibility the Court could determine that there is no one qualified to defend the state's interests in arguing that Prop 8 should not have been struck down. Both the governor and the attorney general have refused to do so. If that's the case, then Walker's overturn becomes de facto law. That would be a victory for gay rights advocates, but a narrow one. While it would likely allow for same-sex marriage in California, it would not address marriage in other states." 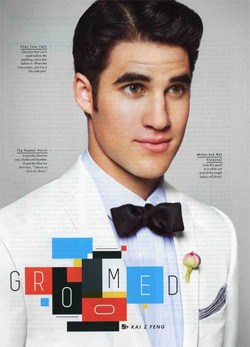 Darren Criss groomed up for GQ.

Gay couple in hiding in Pakistan after court order: "A Pakistani court has directed police to act in accordance with law on an application seeking action against two gay men for entering into a marriage against Islamic laws."

Bear Grylls will just have a sip of his own pee whenever.

Exhibit on gay sailors to open in Halifax, Nova Scotia: "Men cavorting around in brightly coloured feather boas and stilettos wasn't an unusual sight. Some would borrow jewellery and shoes from female passengers. There were light-hearted drag shows and nighttime performances of musical theatre. Gay sailors even had their own secret language they could use to communicate with each other around straight men."