Longtime NYT writer Frank Bruni is moving to the op-ed pages to write an anchor column there, according to the paper's Media Decoder blog: 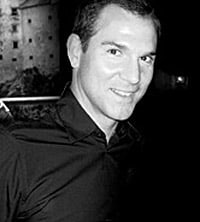 “This column, which will be a new anchor feature of the section, will be a sharp, opinionated look at a big event of the last week, from a different or unexpected angle, or a small event that was really important but everyone seems to have missed, or something entirely different,” [Andrew M. Rosenthal, editor of the Opinion Pages] said. “It will fast become a destination for our readers with Frank at the keyboard.”

He added that Mr. Bruni would also write a column one other day of the week, most likely Thursday.

Mr. Bruni, 46, is the first gay op-ed columnist in The Times’s 160-year history. He said he would take on a wide variety of subjects in his writing.

Bruni has covered presidential campaigns for the paper and served as food columnist for five years.