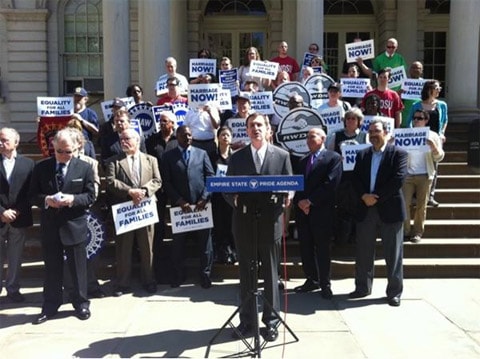 Resounding a message of “equal rights” for all, the leading labor figures stressed serious concerns for the future of social justice for all New Yorkers should the legislature fail to enact marriage equality. Citing a resolution adopted by delegates to the The New York State AFL-CIO Convention in 2008 stating the state labor federation’s “commitment to equal rights for all union members, including LGBT members,” the group raised serious concerns about “discrimination against same-sex couples” and relegation of them to “second-class citizenship.” The resolution concluded by calling upon “the New York State Legislature and Governor to enact a law providing marriage equality for all citizens.”