Last week a judge in Texas ruled that a transgender woman's marriage to her late firefighter husband was invalid. The man's family and his ex-wife had sought to prevent the woman, Nikki Araguz, from receiving any of the $600,000 in death benefits.

The Houston Chronicle reports on the reaction from the gay community in that state: 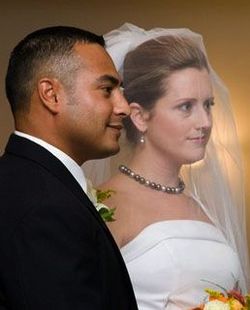 Noel Freeman, president of the Houston Gay, Lesbian, Bisexual and Transgender Political Caucus, said by phone that the news was very disappointing, given that Nikki Araguz had presented legal documents, including her reissued birth certificate, showing she is female. "Here you have a birth certificate, a legally binding document, which the court has chosen to completely ignore," Freeman said. "The transgender community jumps through a lot of legal hoops — records of sex changes, amended birth certificates – to try to live the same life that everybody else gets to live. This is a very frustrating setback."

A two-year-old state law says a court order recognizing a sex or name change is acceptable for marriage license applicants. But a 1999 Texas appeals court ruling stipulates that, at least for purposes of marriage, medical procedures cannot change a person’s sex — you are what you were at birth, period.

This legislative session, politicians have punted on clarifying the issue. And that means that despite the state’s constitutional prohibition of same-sex marriage, some clerks are issuing marriage licenses that, by some definitions, create gay unions. Other clerks are not sure what to do, waiting for lawmakers or the courts to clarify the matter.

“All of that is very unfortunate,” said Representative Lois W. Kolkhorst, Republican of Brenham, whose 2009 legislation is at the heart of the confusion. Ms. Kolkhorst said that at the time she did not realize her bill would create an issue. “We just didn’t get that clarified,” she said, “and we should.”

Araguz is expected to appeal the ruling.

Last year, Araguz spoke about the challenges she faced on her own YouTube channel. Watch one of those videos, AFTER THE JUMP.