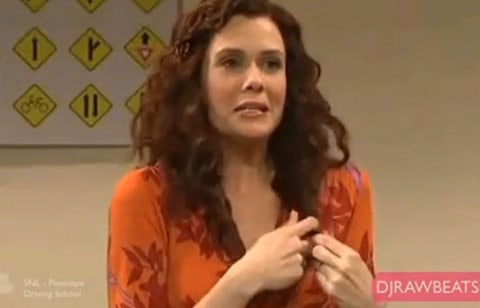 In an interview with TIME, Kristen Wiig reveals she's killing off two of her most beloved SNL characters:

The precision of idiosyncratic looks and gestures is what lets Wiig take one-note characters (a woman who can't keep a secret! A woman who one-ups everyone else's story! A Lawrence Welk–era backup singer with deformed hands!) and make them compelling in their quirkiness. "As much as she goes to extremes and flies off on a broom, her characters are grounded," saysBridesmaids' Rudolph, who also worked with Wiig on SNL. "There's an uncomfortable quality to a lot of them that's painfully funny." Because her characters are simple, she's smart enough to retire them long before other SNL cast members would. She'll no longer do Penelope the one-upper or Gilly the mischievous schoolgirl, not even at Michaels' request.

In memoriam, Penelope, AFTER THE JUMP…