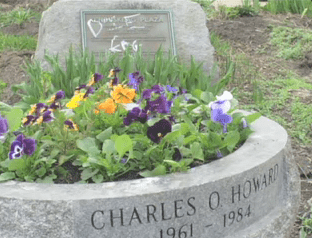 A memorial dedicated to an openly gay 23-year-old who drowned after being thrown off a bridge in Bangor, Maine by three teens in 1984 was vandalized earlier this month, spray-painted with the words "die fag." About 75 people showed up today for a rededication of the newly cleaned up Charlie Howard Memorial.

The Bangor Daily News reports on how the community reacted to the vandalism.

The memorial is the centerpiece of a small community flower garden alongside the bridge over Kenduskeag Stream featuring tulips, hollyhocks, magnolia bushes, lilacs, cosmos and crabapple trees. Macdonald, who along with friend Myer Taksel, has regularly weeded, maintained and cared for the garden the last couple years, said if the intent of the vandal was to intimidate or scare people, it was a failed attempt. “Actually, having something so offensive like that happen to the memorial made all these people regroup, and I think it’s rekindled our intention to encourage tolerance in our community,” she explained. “So in a way, it’s a good thing.”

Diversity Day is celebrated each year on July 7 in Bangor, marking the date of Howard's death. Watch a short memorial video, AFTER THE JUMP.