The White House has responded to an amendment introduced last week by Rep. Duncan Hunter (R-CA) (pictured) intended to delay repeal of the military's "Don't Ask, Don't Tell" policy by interfering with the certification requirements already set forth in the bill Obama signed in December. Those requirements state that after 60 days pass from certification by the president, the defense secretary, and the chairman of the Joint Chiefs, open service can begin. 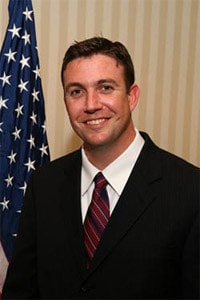 White House spokesman Shin Inouye, responding to a request from Metro Weekly about President Barack Obama's position on Hunter's amendment, wrote, ''The President is working with the Secretary of Defense and the Chairman of the Joint Chiefs to certify, pursuant to the repeal bill, that implementation of the new policies and regulations written by the Department is consistent with the standards of military readiness, military effectiveness, unit cohesion, and recruiting and retention of the Armed Forces.''

He added, ''We have serious objections to any amendment that would unnecessarily delay this process.''

Hunter's office released a statement to Chris Johnson at the Washington Blade suggesting the White House is "uncertain" about repeal:

Joe Kasper, a Hunter spokesperson, said the White House statement is “not much of a surprise” and called on the Obama administration to drop its objection to expanding the certification requirement for “Don’t Ask, Don’t Tell” repeal.

“If the White House is so sure that the military leadership is behind the repeal, then there’s nothing to worry about,” Kasper said. “The White House’s statement just shows how unsure the administration really is with all this. And there’s always lots of talk about transparency and efficiency. So perhaps the administration will rethink it’s position and support the Hunter amendment.”

Hunter's amendment was adopted by the House Armed Services Committee but is unlikely to be made law before certification takes effect.