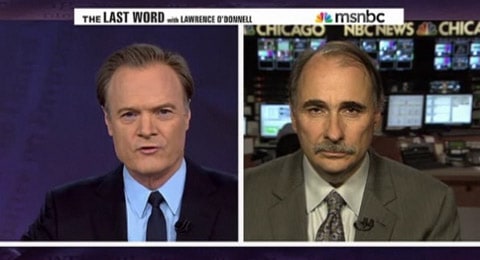 On last night's The LaSt Word, Lawrence O'Donnell used gay and lesbian dissatisfaction with Obama's position opposing marriage equality as a jumping off point for coverage of progressive disappointment at the President's agenda.

Asks O'Donnell: "Is there something that could happen in the next 12 months that could publicly change what is Obama's public position on marriage equality?"

Said Axelrod: "I'm not climbing into the PResident's head here and telling you what he thinks vs what he says. I think he's made very clear his view that gay and lesbian couples are entitled to their legal rights…I'm not going to project ahead and consider hypotheticals…."