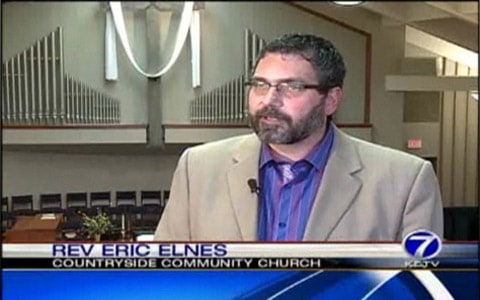 An Omaha, Nebraska pastor has organized more than 100 area pastors of all different faiths to sign a proclamation welcoming gay people to Christianity and distancing themselves from anti-gay Christians, KETV reports:

Rev. Eric Elnes, pastor of Countryside Community Church, said the proclamation was created because, “we were just fed up with the popular notion that the Christian point of view is anti-gay.”

Elnes, who leads an Omaha church of 1,500 members at 87th Street and Pacific Street, said more than 100 ordained Christian ministers have signed the proclamation, including leaders from Lutheran, Episcopalian, United Church of Christ, Methodist and Presbyterian churches.

“We believe homosexuality is not a sin. It’s not a birth defect or a choice. God created people this way. And if God created them this way, they need to be honored for who they are, and fully included in church life and wider society,” said Elnes, whose words are reflected in the document.

The pastors are holding a special event at 6 pm on Wednesday at the Bob Kerrey Pedestrian Bridge to unveil the proclamation and "show full acceptance of gay, lesbian, bi-sexual and transgender people."