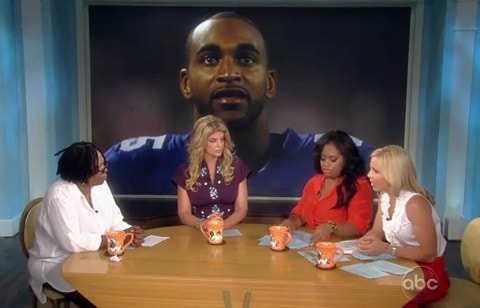 Today on The View, Elisabeth Hasselbeck came to the defense of former NY Giant and NOM spokesbigot David Tyree who has been in Albany working against passage of marriage equality there. Tyree has said gays shouldn't be allowed to raise children.

Said Hasselbeck: "I know David Tyree. I know his heart. He said he has not hate. He loves everyone. He believes everyone is created by God and should be loved as such. He doesn't have bigotry. He truly is just a man who is not a part-time guy following God."

Said Tyree in a video put out by NOM earlier this week:

“Marriage is the only relationship that actually mirrors a relationship with God — it’s very unique in that way…If they pass this gay marriage bill…what I know will happen if this does comes forth is this will be the beginning of our country sliding toward…anarchy…That will be the moment our society loses its grip with what is right…I don't believe that truth is subjective…If you redefine [marriage…it changes the perception of what is good, what is right, and what is just…"