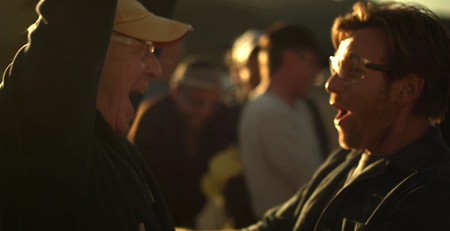 YOUR FEATURE PRESENTATION
Have you ever found yourself wincing in premonitory fear that a gay character or theme will be mishandled by filmmakers or actors? Set those worries aside when approaching the expressive charming BEGINNERS. Though the story about a lonely bachelor artist Oliver (Ewan McGregor) and his newly-out dying father Hal (Christopher Plummer) is fictionalized it has the stamp of the exquisitely personal about it. It's handmade, in other words, never to be mistaken for a movie made by committee. Writer/director Mike Mills' (Thumbsucker) own father came out of the closet when he was in his thirties and the film is an obviously loving tribute from son to father.

Gay characters in the movies are sometimes little more than caricatures and depictions still largely fall into "types". Older gay men have it especially rough in media representations; if they aren't altogether invisible they're desexualized or depicted as lonely and pitiable. Beginners won't have it like that. One could argue that it's practically heroic in its willful embrace of wholly human characters, no matter their age or sexual preference. Hal is played with lively curiousity by Christopher Plummer with that customary dark twinkle in his eye. (It's actually brilliant casting since Ewan McGregor is such a kindred spirit when it comes to those mischievous undercurrents. This is one of his best roles yet.) Though the film doesn't lionize Hal or pretend that his romance with a younger polyamorous lover (Goran Visnjic) is perfect, Beginners is nonjudgmental about all of its romantic entanglements. One might say, it shares a kinship with that great McGregor picture Moulin Rouge!, in its bohemian values. No one vocalizes it but you could easily lift a voiceover from one film to another.

"The greatest thing you'll ever learn is just to love and be loved in return."

Even the dog — the cutest screen terrier since Best in Show (2000) or even The Awful Truth (1937 !) –  knows what's what when it comes to the sanctity of loving relationships, whichever form they take.

Wait, there's a talking dog? MORE AFTER THE JUMP… 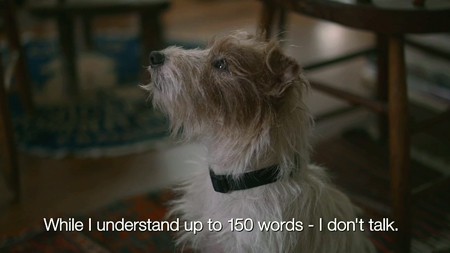 Can't you read? The dog doesn't speak. He just thinks in subtitles.

The dog's thoughts are one of the film's funniest twee flourishes. (If you need your films more literal, you can always assume its meant as satirical jab at our anthropomorphic projections on our furry friends.) 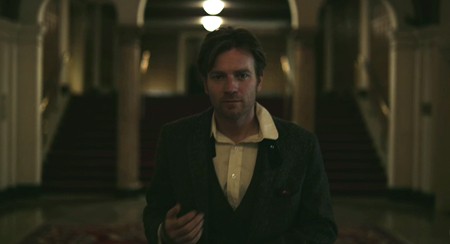 There will undoubtedly be viewers who don't respond to Beginners particular brand of whimsy, which encompasses everything from Oliver's cute but poignant illustrations, to the dog subtitling, to scrapbook like history lessons, to the "meet cute" tropes of romantic comedies (there's a costume party scene). But what romance has ever been completely rational? The movie's amorphous hazy quality as it drifts dreamily from scene to scene and past to present on't be for everyone either. But if you're open to its melancholy playfulness or moved by its father-son story, it'll play like cherished embellished memories of love in many forms (straight, gay, platonic, familial).

There's a wonderful moment late in the film when Oliver and his new girlfriend Anna (Mélanie Laurent from Inglourious Basterds) are looking at a rather revealing personal ad that Hal had written. There's no ageist or homophobic rejection of this overt reminder of his libido, just a beat of genuine curiosity from the straight son and an admiring summation from the young woman, 'He never gave up.' The film is like that, too, continually willing to put its heart on the line.

Also Opening
X-MEN FIRST CLASS teleports the mutant franchise back in time to chart the beginnings of the X-Men mythology and the sexy rivalry between Xavier (James McAvoy taking the reins from Patrick Stewart) and the dangerously alluring Magneto (awesome Michael Fassbender steps in for Sir Ian McKellen); Maria Bello and Michael Sheen try to deal with the fact that their BEAUTIFUL BOY is a mass murderer; Brit indie SUBMARINE charts the relationship between a lonely teenage boy and his dark-tempered bully of a girlfriend with period style and biting comedy. Give it bonus points for its amusing thorny love triangle between the bored marrieds Sally Hawkins & Noah Taylor and their neighbor Paddy Considine, just hilarious as an oversexed new age guru.