New York Republican Senator Greg Ball, one of several lawmakers (here's the list) could swing in favor of same-sex marriage, had his office hand out a memo after he entered a Republican conference this morning about the bill. The memo details further exemptions Ball would like to see carved out for religious institutions. 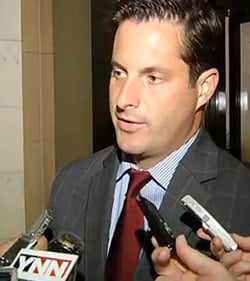 “As a young leader and firm believer in less government, not more, I genuinely appreciate both sides of this polarizing issue. I was sent to Albany to cap property taxes, freeze school taxes for seniors, cut state spending and reform Albany, not to advocate on behalf of social issues to the left or the right.

On one side, it is viewed as a civil rights issue, and on the other side, a direct affront on heartfelt religious beliefs. From repealing “Don’t Ask, Don’t Tell” to widespread equality issues, I have always been an advocate on behalf of gay rights, and to this day, would proudly support the most comprehensive civil union legislation in the nation, while placing marriage equality out to the public for a referendum and a vote.

1) No clergy or other person authorized to conduct marriage ceremonies shall be required to do so against their beliefs or desire, whether religious or not.

2) No religious or tax exempt organizations shall be required to provide any services to which they object because of religious or other beliefs.

3) No house of worship, individual or business with religious objections, or tax exempt organizations shall be required to allow their property or services to be used for any function or purpose to which they object or have their tax exempt status challenged or removed because of failure to permit usage of their property for same sex ceremonies.

Politicker NY says Ball's spokesman says he'll have more to say after the conference this morning.

Ball spoke briefly about the issue to reporters yesterday.