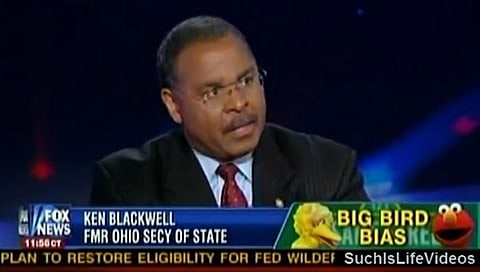 Sean Hannity invited former Ohio Secretary of State Ken Blackwell to a nutty panel about liberal bias on children's programming. Blackwell, as I've noted before when he was running for chair of the RNC, believes "homosexuality is a compulsion that can be contained, repressed or changed."

Blackwell pulls out the story that has freaked him out the most recently — that a gay student in Virginia was crowned Prom Queen last week — and tries to argue that it happened because Sesame Street has a liberal bias and somehow indoctrinated him at an early age.