Last night, True Blood revealed which character would explore a same-sex relationship. How did you all feel about the premiere?

SPOILERS, AFTER THE JUMP… 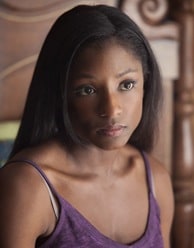 “After I thought about it, I was like I can see that. She’s got some new skin so to speak and she’s living life to its fullest and I think that’s a beautiful thing honestly to see a person go through that sort of change. Without putting any labels to it, she sort of fallen in love and that’s OK, you know. I just think that’s amazing…My main thing is I don’t think it’s because my character has such bad luck with men. I hope that people can understand that. Because I know people, of course, are just going to go to the ‘Oh, they’re just doing that, because she had that relationship and all of a sudden she’s gay.’ No, no, no, it’s not that. It’s just something that happened and she ended up being open to it, which I think is really cool. It’s nice to see Tara a little more Zen and open to things. And she just seems more carefree about life. It feels good to see her smile for a change.”

“We felt like it was time for Tara to stop being the victim. It was time for Tara to really take charge of her life in a way that would be surprising and would give us some fun places to go story wise. We thought, ‘If somebody has been through something like that, maybe they would be prompted to create a whole new life and identity.’ And why not?”