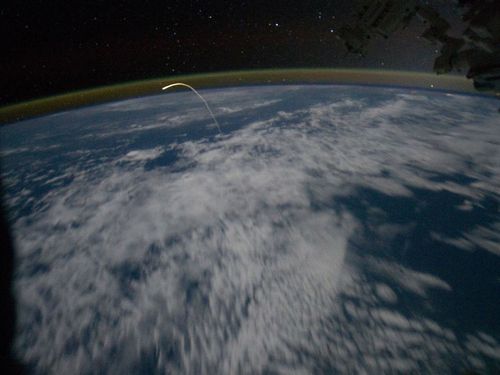 This unprecedented view of the space shuttle Atlantis, appearing like a bean sprout against clouds and city lights, on its way home, was photographed by the Expedition 28 crew of the International Space Station. Airglow over Earth can be seen in the background.

Watch a video love letter to the Space Shuttle program, AFTER THE JUMP… 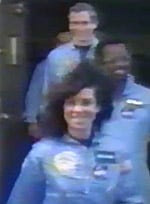 UK's NATURE put together a video using footage from every single Shuttle mission. They explain:

About 18 months ago, we at Nature started to think about the shuttle's retirement. Others will and have written about the scientific legacy of this grandstanding space programme, but I just wanted to make something beautiful. I figured that as each flight followed a very distinct path (countdown, launch, roll, pitch, yaw, jettison boosters etc.), we could show one journey, cut from every single mission, in order.

Nasa, an organisation that has put men on the moon, kept their video archive on VHS. One of my editors described this as "humankind's greatest achievement recorded on the world's lousiest format". So the first job was to digitise and sift through more than a hundred hour-long videotapes.

I knew that I wanted this to be a music video, and that the soundtrack should be soaring, anthemic and unapologetically triumphalist. Twitter led me to the Sheffield band 65daysofstatic, whose rousing, uplifting energy embodies my sentiments perfectly in two different songs. Two brilliant editors, Nature's Charlotte Stoddart, and the band's video producer Dave Holloway took those songs, and all that shonky footage, and made it better than I ever could have imagined. Each space shuttle mission is there, in chronological order (note: the mission numbering does not follow, for various reasons).

Previous Post: « Tori Spelling is a Hoarder…of Gays: VIDEO
Next Post: Nobody Noticed When John Kerry Came Out for Marriage Equality, So He’s Doing It Again »