I guess they won the lottery: 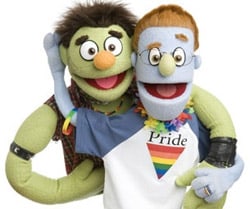 Wedding bells will ring over at off-Broadway's Avenue Q on July 24. To celebrate the first day same-sex couples can legally marry in New York, the show's puppet characters Rod and Ricky will tie the knot at City Hall before the show's matinee.

"To have this finally happen for us—especially so soon after Will and Kate—is unbelievable to me," Rod said in a statement released by the production. "I realize there are a lot of broken hearts out there now that Ricky and I are off the market—step back, all you chorus boys!—but I've known since Day One that Ricky is the husband for me. He's the furry fellow I want to spend my life with both on and off the stage."

As I mentioned last week, the St. James Theatre, where Broadway's production of Hair is staged, will also host several same-sex weddings on July 25th, the day after couples begin marrying.

Previous Post: « Obama Nominates Another Gay Judicial Candidate to Federal Bench
Next Post: Lawrence O’Donnell Looks at the DOMA Hearing and the Al Franken Takedown of ‘Focus on the Family’: VIDEO »